UPDATE: Cave has cleared waivers and has been reassigned to the AHL’s Bakersfield Condors, the Oilers announced.  While there was some speculation that Cave would draw some interest on the wire, particularly from his former team in Boston, it turns out that no one was willing to commit to a roster spot for the young two-way center. There were no players placed on waivers today.

With Josh Archibald being ready to be activated off injured reserve, the Oilers needed to free up a roster spot.  They’ve done so by announcing (Twitter link) that center Colby Cave has been placed on waivers for the purpose of assignment to AHL Bakersfield. 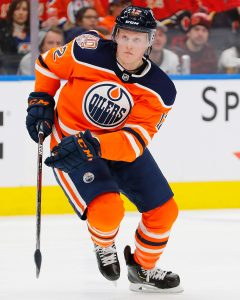 Cave has played in two games so far this season in a fourth line role while also serving two as a healthy scratch.  Recent signing Riley Sheahan appears to be ready to make his season debut while offseason acquisition Gaetan Haas is also in the mix as well which appears to have made Cave the odd man out.

The 24-year-old has had some success offensively at the minor league level but it has yet to translate into much success in the NHL where he has just three goals and five assists in 58 games between the Oilers and Bruins (who signed him as an undrafted free agent).  He did average over a point per game in 15 appearances with Boston’s AHL affiliate last season though.

While someone of Cave’s profile doesn’t necessarily move the needle too much, it’s worth noting that his cap hit of $675K actually sits below the league minimum.  That was part of the appeal when the Oilers claimed him a year ago and there are teams that could certainly benefit from the extra cap space, even if it’s only $25K over the course of a full season.