Winnipeg has agreed to terms with one of their remaining restricted free agents, announcing the re-signing of defenseman Neal Pionk to a two-year contract.  The deal will carry an AAV of $3MM.  Pionk was scheduled to go to arbitration on Wednesday but that hearing won’t be needed now.

Pionk was acquired from the Rangers last month (along with a first-round pick that was used on blueline prospect Ville Heinola) in exchange for defenseman Jacob Trouba. 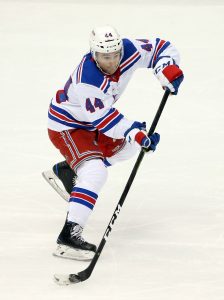 The 23-year-old is coming off of his first full NHL season where he established himself as a capable top-four defender.  He posted six goals and 20 assists in 73 games while logging over 21 minutes of ice time per night.  He also ranked fourth on the Rangers in both blocks (98) and hits (138).

Pionk will likely be asked to play a similar role with Winnipeg although he’ll be playing behind Dustin Byfuglien on the right side of their back end.  The contract should serve as a reasonable bridge deal to see how he’ll fare with his new team and he will still be eligible for restricted free agency at its conclusion in 2021.  At that time, a long-term deal could be on the table if all goes well.

GM Kevin Cheveldayoff still has plenty of work to do this offseason though.  While he’ll find out the verdict on what center Andrew Copp’s new deal will be after going through his arbitration hearing, the Jets still need to re-sign wingers Kyle Connor and Patrik Laine who are among the group of high-quality talent in this year’s RFA class.  (Third-string goalie Eric Comrie is also in need of a new deal.)  Busy days are still ahead in Winnipeg.