The St. Louis Blues have finally done what was decided long ago, signing head coach Craig Berube to a three-year contract and officially removing the interim tag from his position. Berube took over as head coach of the Blues last November and eventually led them all the way from last place in the NHL to the Stanley Cup. GM Doug Armstrong explained exactly why he signed his coach to a three-year deal: 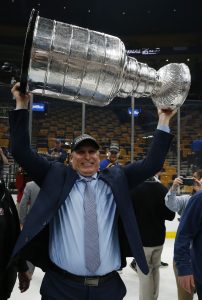 Craig made an enormous impact on our team when he took over last November. He restored our identity and provided our players with a clear sense of direction and purpose. The chemistry and trust that he developed with our players was integral in bringing our franchise the 2019 Stanley Cup.

You can’t have a more successful first season as head coach of an NHL team, and there was little doubt that Berube would eventually become the long-term boss of the Blues. The team went 38-19-6 under him in the regular season, and then bashed and bruised their way to the first Stanley Cup in franchise history. Berube’s playing style came through in every game the Blues played under him, taking lessons from his 3,360 career penalty minutes.

Whether that physical, in-your-face style will be replicated around the league or not, you can bet the Blues come back next season with a similar approach. St. Louis tallied 819 hits in their 26-game playoff run, and slowly wore down their opponents all the way to a league title.

This isn’t the first time Berube has taken over as head coach of a team, as he was promoted to run the Philadelphia Flyers bench, replacing Peter Laviolette early in the 2013-14 season and taking them on an excellent regular season run. Unfortunately the Flyers would go 33-31-18 in the 2014-15 season and miss the playoffs, leading to Beurbe’s dismissal. Blues fans will hope that doesn’t happen in St. Louis, given how well Berube seemed to gel with the roster that he took control of this year.