Friday: Despite the Montreal Canadiens suffering several injuries to their forward group, the team announced today that they will place Tomas Plekanec on unconditional waivers for the purpose of a mutual contract termination. Plekanec hasn’t seen much ice time this season but is close to returning from his latest minor injury, but will not suit up again for the Canadiens. 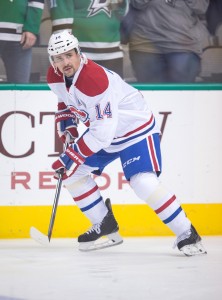 At the press conference to discuss the move with the media, GM Marc Bergevin explained that this was a “hockey decision” to let Plekanec go. The 36-year old forward was near tears when talking about always wanting to retire in Montreal, but did note that he would look for opportunities in the Czech Republic for the next few years. It seems as though his NHL days are over. Plekanec spoke about how the team is in good hands with the young group in the dressing room, and how Bergevin did approach him with the idea of a trade at one point before making this decision.

Though there is still the formality of clearing waivers and then terminating the contract tomorrow, it seems like the end of the North American journey for Plekanec. Selected in the third round of the 2001 draft, he would make an impact at the AHL level right away and show that the rest of the league made a mistake in passing on him. By the time the league returned from lockout in 2005, he was a full-time player for the Canadiens and wouldn’t look back. Plekanec played in at least 77 games for 11 consecutive seasons (not counting the lockout-shortened 2012-13, in which he played 47 of 48) and was the picture of health and consistency for a team that went through plenty of change. Hitting a career-high of 70 points in 2009-10, Plekanec was a huge part of a Montreal team that went to the Eastern Conference Finals.

The Canadiens will not be on the hook for any of Plekanec’s cap hit, even though he signed his most recent contract over the age of 35. Because the deal was just for one season, the restrictions usually applied to 35+ deals—that is, a cap hit that remains with the team regardless of what happens to the player—do not apply. Only multi-year contracts are punished in this way, meaning the Canadiens are free and clear of anything to do with Plekanec’s contract.

In fact, the last year has been quite beneficial for the Canadiens when it comes to Plekanec. Last spring they traded the veteran center to their rival Toronto Maple Leafs for a package that included a second round pick, only to see him return to play his 1,000th game in Montreal this year. The Maple Leafs were knocked out of the first round anyway, and no other piece from the deal is still on either roster. The fact that he’s willing to step aside and allow the team to fill the roster with the next wave of Montreal forwards is just the latest in a long career filled with putting the Canadiens ahead of himself.

Known best for his trademark turtleneck and goatee, Plekanec will not go down alongside the very greats of the Montreal franchise. He was never part of a Stanley Cup run, and scored just 608 points in his 1,001 games. Still, he’ll be remembered as an efficient soldier by many fans and revered for his loyalty to the franchise to the very end.