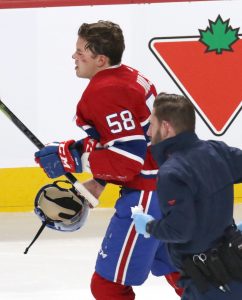 After taking two pucks to the face last night, Montreal Canadiens defenseman Noah Juulsen has been ruled out indefinitely with a facial fracture. He will remain in Montreal while the team heads out on their road trip and will undergo further evaluation. He and Nikita Scherbak have been placed on injured reserve, while the team has recalled forward Michael Chaput to fill one of the roster spots.

Juulsen, 21, looks to have made the jump full-time to the NHL this season after splitting time between Montreal and Laval a year ago. That consistency had resulted in five points through his first 17 games, and increased responsibility for the team. In fact, in his last game before suffering the injury against Washington, Juulsen had logged over 20 minutes of ice time. Originally selected 26th overall in 2015, the former WHL standout has all the makings of a solid top-4 option for Montreal going forward. Unfortunately, key development time will now be missed as he works his way back from this injury.

Chaput meanwhile will try to show that he can still be an NHL option after continuing his successful offensive play at the minor league level. A third-round pick of the Philadelphia Flyers back in 2010, Chaput has played just 135 games over his NHL career and none since signing with the Canadiens in July. He does have seven goals and ten points in 18 minor league contests this season with the Laval Rocket, but needs to translate that offense to the NHL if he wants to stay there.