Though he won’t officially retire for several years, Henrik Zetterberg’s hockey playing career is over. Today at Detroit Red Wings training camp, GM Ken Holland announced that due to the chronic back injury that Zetterberg has dealt with, he will not play again. The Red Wings captain was unable to train at all this offseason and recently consulted with the doctor who originally completed his back surgery. The decision was made that he cannot continue. 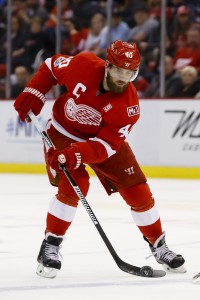 Zetterberg, 37, has three years left on his contract that will likely be placed on long-term injured reserve in the coming weeks. The decision of when exactly to make that transaction depends on who the Red Wings decide to take on the roster, and how they want to work their salary cap for this season. His $6.083MM cap hit will give the team added flexibility going forward, but there isn’t a single player or fan in Detroit who was rooting for this outcome.

Despite dealing with crippling pain at points during last season that kept him from practicing with the team, Zetterberg played in all 82 games for the Red Wings. Though his goal total fell to the lowest mark of his career in a full season, he still recorded 56 points to come second on the team behind only Dylan Larkin. Combine that offensive production with the fact that Zetterberg has long been one of the most defensively responsible forwards in the league and he was still arguably the Red Wings most important player.

That importance was evident right from the moment Zetterberg made his debut in 2002. Scoring his first goal by being in the perfect position, that would be become a motif throughout his career. Always in the right place at the right time, Zetterberg would score 21 more goals in that rookie season and 393 more in his Detroit career. 57 of those came in the playoffs, where he took home the Conn Smythe Trophy in 2008 when the Red Wings won the Stanley Cup.

Zetterberg will almost certainly wait out his contract before officially announcing his retirement like so many others, which also will avoid any cap recapture penalty for the Red Wings. Some will draw immediate comparisons to the Marian Hossa situation, given that Zetterberg’s actual salary was set to drop to just $5.35MM over the next three seasons combined. The player himself once explained that the last two seasons—in which he would earn just $1MM in salary annually—were just added to the end of the deal to keep the cap hit low and were never expected to fulfilled. While Zetterberg walked back those comments quickly by saying he would obviously play if physically possible, this injury obviously still comes with conspicuous timing.

Regardless of the intent, the NHL will lose one of the very best to play the game this season when Zetterberg fails to suit up for the Red Wings. With 1,082 games played, 960 points, a Stanley Cup and a Conn Smythe, there could very well be a trip to the Hall of Fame down the line for the Detroit captain.