With the NHL season now less than a month away, it’s time to look at what each team has done this summer and what to watch for in the year to come. Today, we focus on the Pittsburgh Penguins.

Last Season: 47-29-6 record (100 points), second in the Metropolitan Division (lost to Washington in the second round of the playoffs, beat Philadelphia in the first round)

Player To Watch: F Derick Brassard – In an effort to strengthen their depth down the middle leading up to the deadline, Pittsburgh swung a three-way trade to bring Brassard in.  In doing so, they gave themselves a legitimate top-six center on the third line which they hoped would really bolster their attack.  Unfortunately for them, that didn’t go as planned as Brassard struggled with his reduced role. 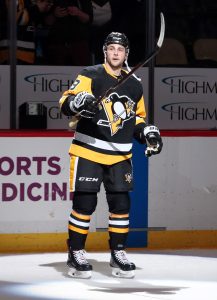 There is certainly cause for optimism to think that a full training camp and regular season would help in this regard but they do have another option that they’re going to try, moving him to the wing.  Doing so would allow him to play in the top six like he has been accustomed to.

Teams are certainly going to be keeping close tabs on him as Brassard is slated to become an unrestricted free agent at the end of the season.  If he fares well on the wing, the extra versatility will certainly strengthen his case on the open market and he’ll give the Penguins another prominent offensive weapon.

On the flip side, if he struggles, he could conceivably become a trade candidate by the deadline as salary cap space will once again be at a premium.  GM Jim Rutherford likes to try to make a big addition each season and if Brassard isn’t getting the job done, it’s certainly possible that he’d be part of a return going the other way or flipped to create the cap space to make that addition.  Suffice it to say, there’s a lot at stake for Brassard heading into 2018-19.

Key Storyline: For the last few years, Pittsburgh has been tweaking their defense corps but now, with all of their top-six options locked up for at least two seasons (five of them for three or more), there is now the potential for a bit more stability at that position.

The addition of Johnson and extension for Jamie Oleksiak gives them a third pairing that can log more ice time than a typical number three unit if need be which should allow them to scale back minutes for someone like Kris Letang if they so desire.  It also gives them a bit more insurance in case of injuries.

While their offense justifiably gets most of the attention, the back end has had some incremental improvements.  However, it still remains a question mark.  Is this group good enough to get the job done or will Rutherford need to continue to make changes?

Overall Outlook: The Penguins have been contenders for quite a while now and they should be one once again with the majority of their roster from last year returning for another season.  The Metropolitan Division projects to be quite tight once again so they may not walk away with first place but they’ll undoubtedly be in the mix once the postseason arrives.