With the NHL season now just a few weeks away, it’s time to look at what each team has done this summer and what to watch for in the year to come. Next up is a look at the New York Islanders.

Player To Watch: F Anders Lee – It’s rare that a 40-goal scorer largely goes under the radar but that’s the case here with Lee.  He potted 40 for the first time in his career and since his name didn’t start with John and end with Tavares, not many people seemed to notice as the focus was squarely on their now-former captain. 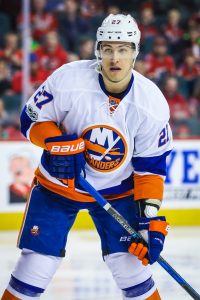 Lee also spent a lot of time playing alongside Tavares so with him out of the picture, how might that affect his production?  Sophomore center Mathew Barzal is no slouch and he will likely ascend to the top line now but there’s no guarantee that the duo will be able to find that same level of chemistry.

The 28-year-old also happens to be entering the final year of his contract so teams around the league will be quite intrigued to see if he can repeat that type of output (or at least come close).  A strong season would cement him as one of the top forwards in the 2019 free agent class but if he falters, his value will take a significant dip, especially considering how some other former Tavares linemates have fared since going elsewhere.  These next few months will have a considerable impact on his value which makes him a player to keep an eye on.

Key Storyline: Most teams around the league have tried to gear their rosters towards more speed and skill.  New Islanders GM Lou Lamoriello went a different route this summer, making an already gritty team a lot more physical with the additions of Komarov and Martin while handing tough guy Ross Johnston, a veteran of all of 25 NHL games, a four-year, $4MM contract.

How is that approach going to work?  They’ve lost a lot of skill with Tavares heading to Toronto and have basically brought in depth players to fill their vacancies so it’s clear that they’re hoping that their extra toughness is going to help compensate for that.

It has been a while since a team has had this much physicality in their bottom six group of forwards so how they fare will be worth watching.  If they exceed expectations, other teams will take notice and perhaps there will be a shift towards more physicality.  If not, will their struggles give pause to other teams who may be pondering this strategy?

Overall Outlook: It’s hard to see the Islanders really being in the hunt for the postseason.  They have significant questions in goal and replacing Tavares with more grit probably isn’t going to work out too well for them.  This is a team that’s probably going to be a seller at the trade deadline and as a result, will have some interesting decisions to make with their pending UFAs (a list that includes Lee, Brock Nelson, and Jordan Eberle).  New York already looks fairly different after their offseason activity but there could be many more changes in the next few months.