Only a season ago, Steve Mason was a highly-sought after goaltender and was rewarded with a probably unrealistic two-year deal worth $4.1MM AAV from the Winnipeg Jets. However, many were surprised the 30-year-old goaltender received such a deal for a player who has had a roller-coaster career from sharp highs to inconsistent lows. 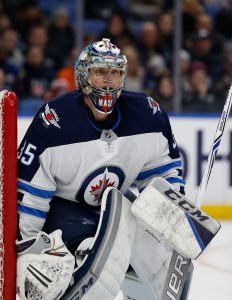 That certainly came to play as Mason suffered through multiple injuries, including several concussions, which allowed Connor Hellebuyck to claim the starting job outright and put up a dominating season. Mason, meanwhile, who many thought would split responsibilities in net with Hellebuyck, settled into a backup role, but couldn’t stay healthy enough to help the Jets during their playoff run. In the end, Mason posted a 3.24 GAA and a .906 save percentage in 13 games.

That was enough for Winnipeg, who needed to free up cap space as they shipped packaged promising Joel Armia with Mason and shipped them to Montreal. From there Mason was bought out, leaving him an unrestricted free agent.

While his numbers have steadily worsened over the past four years, Mason has been inconsistent throughout his year with several seasons in which he has posted amazing numbers like when he put up a 2.25 GAA and a .928 save percentage in 51 games in the 2014-15 season. Despite his struggles, if the veteran can prove healthy, he could provide solid backup minutes for a team in need.

While many teams are set in goal, there are quite a few who could use help. The first place that might seem to make sense would be the Stanley Cup champion Washington Capitals, who traded away backup Philipp Grubauer to save their own cap space, leaving them minor league veteran Pheonix Copley. Mason could provide the team with a preferred veteran solution, but that’s assuming that Mason would take quite the pay cut considering the team’s cap issues.

The Rangers might be another team that could use an emergency veteran. New York is considering playing Alexandar Georgiev as their backup, but could use a more veteran presence if the 22 year old fails. The Blackhawks could also be an ideal place. Even though the team added Cam Ward, it’s already been announced that starter Corey Crawford will likely not be ready to start the season with the team, so adding Mason could add some much needed depth if he goes down for any extended period of time.

While he managed to garner $4.1MM a year ago, it’s likely Mason will have to accept a deal under the $1MM mark and may even have to take a PTO deal at this point. The veteran could also wait out training camp to see if any goaltenders go down with injuries and hope to grab a backup spot then.