The Anaheim Ducks acquired Adam Henrique last season to give them some more versatility and scoring punch up front, and now it looks like he’ll be around for the long haul. Henrique has signed a five-year extension with the Ducks, that will keep him in Anaheim through the 2023-24 season. The new deal carries an average annual value of $5.825MM, but Henrique has one year remaining on his current contract which will pay him $5.5MM ($4MM cap hit) this season. With the extension, the New Jersey Devils will now receive Anaheim’s third-round pick in 2019. 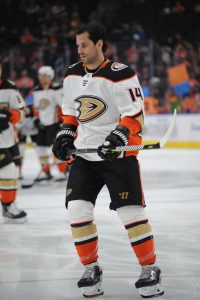 Henrique, 28, fit in incredibly well with the Ducks in the second half of the season, scoring 20 goals and 36 points in just 57 games. Add that to the 14 points he had for the Devils and Henrique posted the third 50-point campaign of his career while giving Anaheim a versatile player that can be moved all over the ice. Amazingly those 20 goals trailed only Rickard Rakell for the team lead (Ondrej Kase also scored 20 on the season) despite his relatively few games played, leading some to wonder what he can do in a full season with the team. Henrique has scored 30 goals in his career once, and will now be relied upon for that kind of production going forward. Earning nearly $6MM per season puts him behind only Ryan Getzlaf, Corey Perry and Ryan Kesler among the team’s forwards, and the deal falls in between contracts for players like Kyle Turris ($6MM for six years) and James Neal ($5.75MM for five years).

Where Henrique will be used most often for the Ducks is unclear at this point. Though he does have experience on the wing in his career and was used there at times for the Ducks, the majority of Henrique’s time in the NHL has been spent at center. With the future for Kesler still up in the air given his recent injury troubles, there will likely be a hole in the middle for Anaheim this season that Henrique will be asked to fill. Rakell, also once considered a center, has found so much success on the wing the past few years that he likely won’t be asked to move back, leaving second line duties to the former Devils forward.

Henrique was also given time on both the powerplay and penalty kill last season, which is likely to continue given his role and new contract. He’ll be asked to be a key member on a squad that is continually trying to contend for the Stanley Cup, and could even be tasked with going head-to-head with the opponent’s best forward line depending on whether or not Kesler is healthy enough to continue his career. With Antoine Vermette also out of the picture there are big defensive responsibilities up for grabs in Anaheim, something that Henrique has shown himself capable of in the past. Unfortunately he doesn’t come with the same faceoff skill, but few come close to matching Vermette in that category.

It is somewhat curious that the Ducks would agree to such an expensive contract extension so quickly, given that they have huge question marks about their financial structure going forward. Brandon Montour, Nick Ritchie and Kase all remain unsigned for next season as restricted free agents, while John Gibson and Jakob Silfverberg will need expensive extensions before the start of 2019-20. Anaheim is already relatively tight to the salary cap this summer with just $9.5MM to spread out among their three RFAs, and could find themselves in a bind next year now that Henrique is taking up a big chunk. The outlook isn’t dire, but a $5.825MM cap hit for Henrique doesn’t give a lot of room for excess value and in fact brings some serious risk given he’ll turn 30 during the contract’s first season.