With the Senators struggling mightily this season, it has been expected that they will be sellers in the weeks to come.  One player that has been suggested as a candidate to be dealt is center Zack Smith and Postmedia’s Bruce Garrioch reports that Calgary is believed to have shown an interest in his services.

Smith is in the first year of a four-year, $13MM contract he signed last January, foregoing unrestricted free agency in the process.  At the time, he was in the midst of his second straight season with at least 15 goals and 30 points and was providing Ottawa with strong secondary scoring along with his usual gritty style of play. 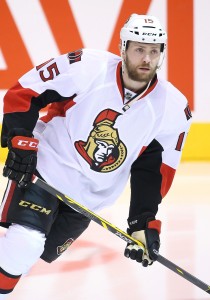 Things haven’t gone as well for the 29-year-old this season, however.  Smith has battled injury issues, missing time with three separate problems (upper-body, thumb, and shoulder) and when he has been in the lineup, he hasn’t been as productive as he has in recent seasons.  Through 27 games, he has just three goals and six assists despite logging over 16 minutes of ice time per night.

It’s understandable that Calgary would have interest in adding some help down the middle.  Sam Bennett has played well since moving to the wing while there is some uncertainty regarding the future of pending UFA pivot Mikael Backlund.  Matt Stajan, their fourth line center, is also set to be an unrestricted free agent as well so landing someone with several years of team control would make some sense.  Smith’s physicality would also fit in well in the tougher Western Conference.  It’s worth noting that he has a ten-team no-trade clause and it’s not known at this time if the Flames are on that list or not.

Considering his struggles this season, whoever acquires Smith would be taking a bit of a risk that a change of scenery helps get him back to the level he has played over the past couple seasons because if not, he will be an expensive depth player.  However, it’s fair to infer that Ottawa’s asking price can’t be too high given Smith’s struggles so while there is a bit of risk, there is certainly the potential for a higher reward as well if he returns to his 2015-16/2016-17 form.