The Tampa Bay Lightning have acquired recently demoted goaltender Louis Domingue from the Arizona Coyotes, sending Michael Leighton and Tye McGinn to the desert in return. Domingue’s role as the backup had been usurped by Scott Wedgewood, and he’ll now have to find his game somewhere else. 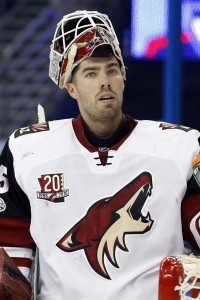 Of course that likely won’t be in Tampa Bay, at least not right away. The Lightning have Andrei Vasilevskiy and Peter Budaj locked in as their NHL duo for the time being, while Leighton had been starting for the Syracuse Crunch. Still, it could be just the fresh start Domingue needs to get his game back on track. At one point in the past, Domingue was an up-and-coming goaltender that looked poised to take on at least a part-time role in the NHL. He posted acceptable numbers over the last two years behind a bad Coyotes team, but saw his play fall off this year.

Interestingly like Dominuge, Leighton doesn’t have a clear place to play in the Coyotes organization. The Tucson Roadrunners, Arizona’s AHL affiliate, already have three goaltenders on the roster in Hunter Miska, Adin Hill and Marek Langhamer. Perhaps the 36-year old Leighton will be loaned somewhere else.

The only forward in the deal is McGinn, who hasn’t seen the NHL since 2015-16. Though he’s an effective minor league player, his NHL career has been less than impressive. In 89 career games he has 17 points, but has little upside at the age of 27. Still, he could find his way into the Coyotes lineup at some point if they continue to struggle this season.