Although Canucks GM Jim Benning stated last week that they still have plans on talking to defenseman Erik Gudbranson about a contract extension, TVA Sports’ Renaud Lavoie reported on a radio appearance with Sportsnet 590 (audio link) that there is some trade interest around the league surrounding the blueliner.  In particular, Lavoie pegs the Maple Leafs as a team with interest in him as well as several other stay-at-home defenders around the league, though those others aren’t at Gudbranson’s level.

The 25-year-old has played in 18 games so far with Vancouver this season and has yet to record a point.  However, he sits second on the team in both hits and blocked shots and would give Toronto another defense-first option on their back end.  Lavoie added that Toronto is ideally looking to add a defender before December’s holiday break (from December 24th to the 26th). 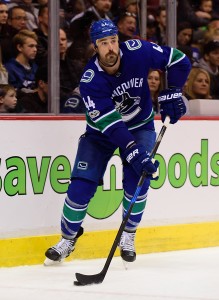 The Leafs aren’t alone in their pursuit of a stay-at-home rearguard as Lavoie adds that the Canadiens are also looking to add one and could be interested in Gudbranson while he suggests that Ottawa may be looking to add a blueliner as well.  Considering Senators GM Pierre Dorion has stated several times that he likes his current defensive depth, it’s likely that a move on that end for them would be closer to the trade deadline with an eye on hedging against some injuries for the postseason.

One team that doesn’t appear to have interest in Gudbranson is his former team in Florida.  Jason Botchford of the Vancouver Province reports that the Panthers (who at one point were rumored to have a trade in place for him over the summer involving Jason Demers) are no longer interested in pursuing his services.

Gudbranson is in the final year of his contract with a salary and cap hit of $3.5MM and is slated to become an unrestricted free agent in July.  If the team can’t come to terms on an extension with him, there’s a good chance that the defenseman will become one of the more sought-after rental players in the weeks and months to come.