The Coyotes have brought in some goaltending depth, acquiring Scott Wedgewood from the Devils in exchange for Calgary’s fifth-round pick in 2018.

Arizona has had all sorts of problems between the pipes this season with Antti Raanta missing of the year thus far due to injury while backup Louis Domingue has struggled considerably in an expanded role.  Adin Hill has had some good and bad moments in his first NHL stint but he isn’t the solution either.  The duo rank 46th and 43rd respectively in save percentage among 50 qualifying goaltenders league-wide.  Following the trade, the Coyotes announced that they’ve returned Hill to AHL Tucson. 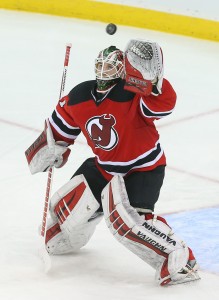 Wedgewood missed most of 2016-17 due to labrum surgery but has been one of the more reliable goaltenders at the AHL level over the past few seasons.  However, with MacKenzie Blackwood, New Jersey’s top goaltending prospect, needing as much ice time as possible, playing time has been hard to come by for Wedgewood this year as he has made just one appearance at the minor league level.  Taking his place on the roster for New Jersey is Cory Schneider, who has been activated off injured reserve.

The 25-year-old could battle Domingue for the backup role behind Raanta when he’s ready to return to the lineup (which is expected to happen in the near future) or serve as an upgrade in the minors.  Having cleared waivers back in training camp, he still has some exemption time remaining.  If Wedgewood does go to the minors, it will be interesting to see if Marek Langhamer, currently in Tuscon, exercizes an opt-out in his contract next month (per Arizona Sports’ Craig Morgan) that would see him go to the Czech Extraliga (Arizona would still retain his rights).

Wedgewood is making the league minimum of $650K at the NHL level and just $110K in the minors making this a wise pickup for Arizona.  However, although he is too young to become a standard unrestricted free agent, he’ll still likely hit the open market in July as a Group VI free agent unless he gets in 24 NHL games (playing at least 30 minutes in each) this season.

Sportsnet’s Elliotte Friedman (Twitter link) was first to report the two sides were closing in on a deal while Arizona Sports’ John Gambadoro was first with the details.