The New York Islanders have decided the strong finish to the season is enough to keep Doug Weight around for the immediate future, removing the interim status and announcing him as the full-time head coach going forward. When Weight took over from Jack Capuano midway through the season, the Islanders were just 17-17-8, a far cry from their 100 point season of the year prior. With Weight at the helm, they finished 41-29-12 and missed the playoffs by just a single point even with a John Tavares injury in the final week. 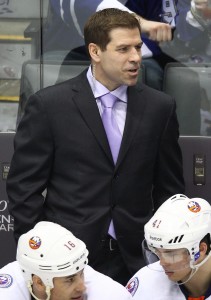 Weight, a long-time NHLer who finished his career with the Islanders, had 1033 career points in 1238 games and was a playmaking machine, once recording 79 assists in a season. His leadership will be welcomed for a team that has a superstar in his prime that is just a year away from free agency.

For Tavares, providing stability behind the bench and a home for the team are likely important factors in assessing his future with the club. Bob McKenzie of TSN thinks that the team is getting closer to a deal with the Belmont Park arena plans that were put in place months ago. Building a brand new arena for the Islanders would look attractive to any free agent, including one that would be heralded as the savior of a franchise should he stick around for the majority of his career. With an extension allowed to be announced no earlier than July 1st of this year, getting Weight locked in and a new building on the books would be a nice position of strength for New York.

Weight will look to drag the Islanders back to the postseason in 2017-18, after encouraging performances from their young core. Josh Bailey, Anders Lee and Brock Nelson all put up career-highs in points this season and will look to continue that success next year. Andrew Ladd, the big free agent signing of the offseason, started horribly but turned around his year with 15 of his 23 goals during Weight’s tenure.